As we get ready to celebrate another week of music, food, and friends near, far, and gone, I wanted to flash back to some images from the past. 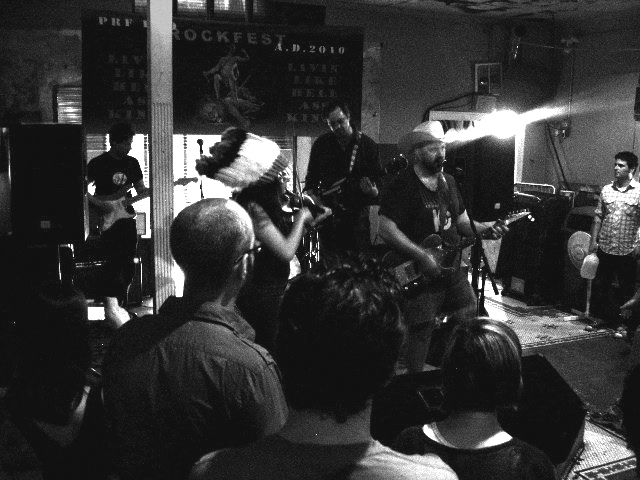 END_OF_DOCUMENT_TOKEN_TO_BE_REPLACED

Bear Claw caught performing live at Quenchers Saloon in Chicago, IL on June 10th, 2010 as part of the PRFBBQ2010. Thanks to thenithin21 for capturing this moment in time, though I recommend turning your speakers down before you hit play.

For more info on the band, please visit https://bearclaw.bandcamp.com/.

.22 performs Twain live on the opening night of the PRFBBQ2010 at Quenchers Saloon in Chicago, IL on Thursday, June 10th, 2010. Video courtesy of forum member tommydski.

Hey man, my name is Tree and I helped head up the grilling team for the 2009 PRF BBQ and its successor, the 2010 PRF BBQ.  The food at these BBQs was something to be proud of and very representative of the PRF’s lack of willingness to engage in the store-bought/prepackaged/cheap.  There were dozens of sausages from Chicago’s stellar Paulina Meat Market, even more sausages from the state of Wisconsin, homemade sausages, burgers hand-formed and seasoned with love and topped with a variety of cheeses, chicken parts, fish, and even pork shoulder.  “You Eat Well or You Go to Hell” was our motto*.

For both of these events, I made the decision to handle the vegetarian grilling duties.  I am not a vegetarian, far from it, though I tried it for about six months in 2003 until my wife became pregnant with our second child and was ravenous for meat.  Since it turned out the baby was mine, I figured I should start eating meat again as well.  I am a vegetarian sympathizer, and as an avid griller, it pains me to attend/host a cookout and see the meatless folks show up with frozen veggie patties, or even worse, tofu dogs.  There are actual vegetables to be consumed and many of them are delicious when grilled, so allow me to talk about the items that I made for these BBQs.

END_OF_DOCUMENT_TOKEN_TO_BE_REPLACED

Check out these awesome videos from youtuber MsNdrkr! The Gary performing live at PRFBBQ2010 at THInk Space on Saturday June 12th, 2010 in the beautiful city of Chicago. For more information on The Gary, please visit https://thegary.com/.